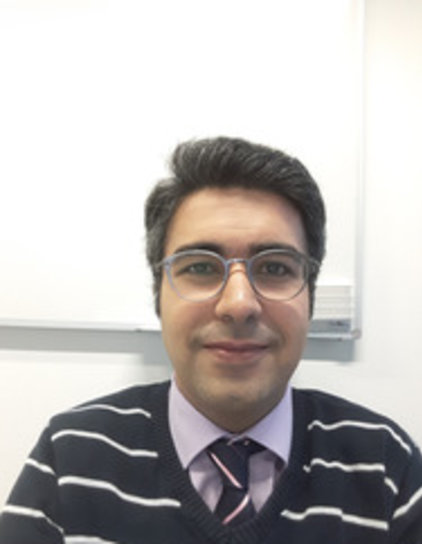 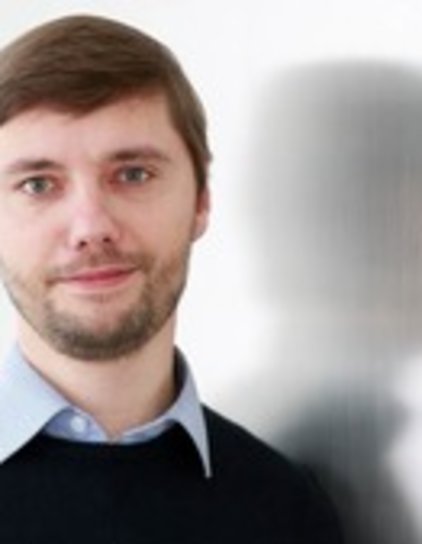 Hydrogen embrittlement is a persistent mode of failure in modern structural materials. The processes related to HE span various time and spatial scales. Thus we are establishing multiscale approaches that are based on the parameters and insights obtained by accurate ab initio calculations in order to simulate HE at the continuum level. 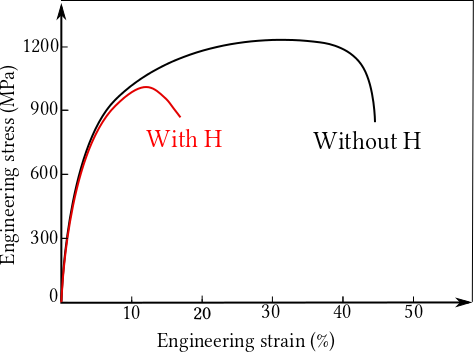 The detrimental effects of hydrogen contamination on the mechanical properties of metals is a long-standing issue in the field of materials science. In particular, innovative materials concepts, such as high-strength steels, nickel-based superalloys, and light-weight aluminum alloys often belong to those metals that are susceptible to hydrogen embrittlement (HE). Hence, hydrogen atoms that enter the metal either during processing or application can lead to catastrophic degradation of the mechanical properties of metals.

Ab initio based simulations provide details about the distribution of hydrogen atoms between interstitial sites in the bulk of the metals and various traps in the microstructure. These traps, which have a crucial role in HE, include dislocation cores, free surfaces, grain boundaries, precipitate/matrix interfaces, microcracks, vacancies and nanovoids. In addition, the diffusion between traps with different strengths levels induces rate and temperature effects on the response of the H charged metals.  The variety of aforementioned hydrogen sources and traps in metals, and the strong dependence of H kinetics on the crystal and microstructure makes a comprehensive and universally applicable description of the HE process hard to achieve.

Nevertheless, there are macroscale continuum models for certain materials classes available, which need to be evaluated and supported  by accurate atomistic simulations on the nanoschale. We, therefore, aim at the development of an efficient, scale-bridging approach that allows for catching process-relevant states of steel products, including massive deformations, high defect densities, and varying chemical loadings. To this end, we couple crystal plasticity finite element (CPFEM) phase field models that are implemented in the Düsseldorf Advanced Material Simulation Kit [1] with electronic and atomistic scale information about the system via efficient averaging in terms of composite models. 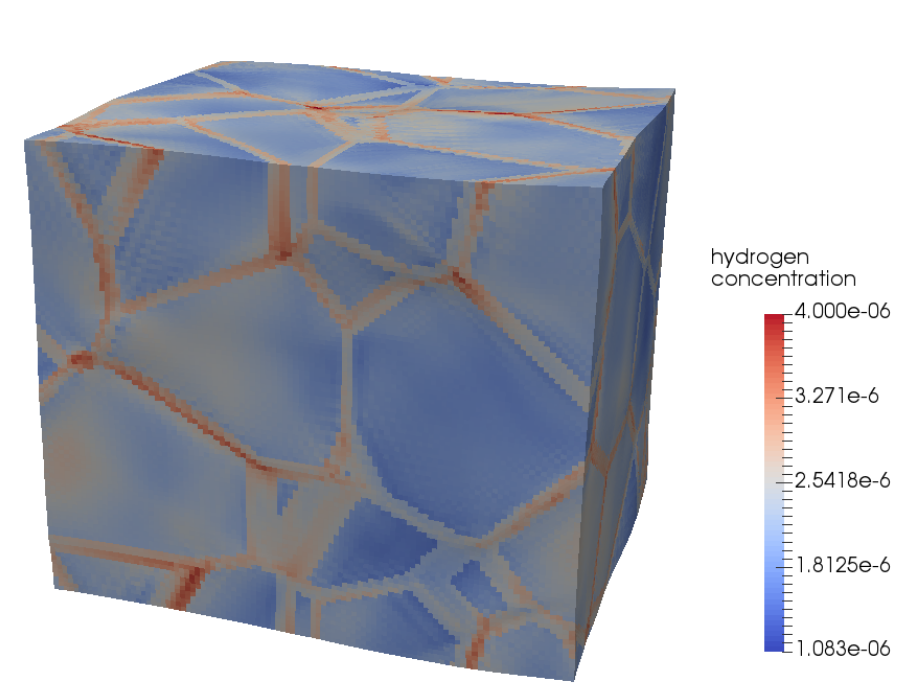 To simulate the diffusion of H, we have developed an atomistically informed crystal plasticity model in conjunction with the phase field method  [2]. The binding energies of H atoms to dislocations and grain boundaries are calculated within DFT and incorporated into this model.  In this way, a realistic concentration map of H within the metal is ensured.

The figure shows the resulting heat map of the H concentration in polycrystalline nickel. It can be seen that the H atoms are bound to the grain boundaries. The next step for augmenting this model is to include (1) the phase field for intergranular and transgranular fracture and (2) a model for nanovoid formation and growth at the grain boundaries. The simulation of fracture processes requires atomistic data on the dependence of the surface and interface energies on the H coverage.  The nanovoid formation and growth model needs the information about the vacancy formation energy and vacancy diffusion in the presence of H atoms bound to it. 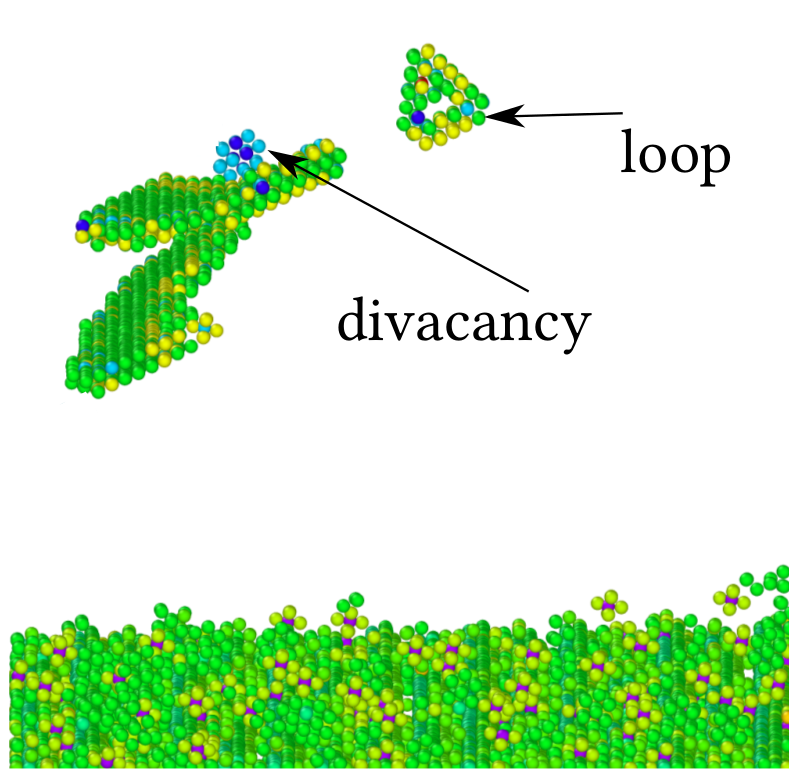 Extensive experimental observations indicate the presence of nano-voids and the increase of the free volume along grain boundaries in hydrogen contaminated metals [3]. This rate-dependent phenomenon motivates theoretical investigations of the underlying mechanisms. Here, a mechanism for an enhanced cross slip of the dislocations in the close vicinity of a grain boundary is demonstrated by direct molecular dynamics (MD) simulations. The interaction of the screw dislocations with a variety of symmetric tilt grain boundaries in H-charged and H-free bicrystalline nickel specimens have been examined [4].

In contrast to established models like HELP (hydrogen enhanced local plasticity), our approach is not based on a direct interaction of hydrogen with dislocations. Instead, the segregation of hydrogen atoms to the grain boundaries induces stress fields around them. As a consequence, the barrier for cross-slip of the screw dislocations considerably decreases. The enhanced cross slip of dislocations facilitates the formation of jogs at certain loading rates. These jogs can then emit vacancies during the glide process.
This mechanism shows nano-scale evidence for a rate sensitive enhanced vacancy formation and a subsequent increase in the free volume along the grain boundaries in the presence of H.  The results of this study will be used for our multi-scale model of capturing nanovoid formation and growth.

[4] A. Tehranchi, T. Hickel, J. Neugebauer, Hydrogen enhanced cross-slip of dislocations in the vicinity of grain boundaries in nickel, Under preparation.