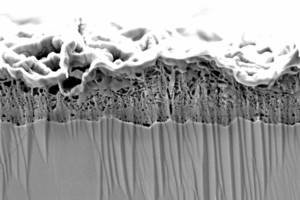 The scanning flow cell enables a high-throughput screening approach that is able to deal with the issue of the complex interrelation between many parameters, for instance the variable ion composition of salts. The fully automated system provides dynamic electrolyte change even during the measurement and thereby allows a comprehensive investigation of the individual effect of different electrolyte constituents with temporally varying concentrations. [more]

The in situ measurement of mass gain, especially during fast temperature cycles, which is a problem of significant practical importance, remained a problem that was experimentally unsolved. The reason for this is that due to fast changes of temperature in close vicinity to the sample surface, thermal drifts begin to dominate the thermobalance signal, making a clear scientific interpretation of the mass changes impossible. [more]

Hydrogen atoms, which can be absorbed into steel during production and service, often have a detrimental embrittling effect on the mechanical properties of iron and steels. It is meanwhile known that hydrogen embrittlement (HE) is also affected by the microstructure of the material. Consequently, previous indications that hydrogen atoms are trapped by vacancies, dislocations, and grain boundaries led at MPIE to investigations of superabundant vacancy formation, hydrogen-enhanced local plasticity (HELP), and hydrogen-enhanced decohesion (HEDE). [more]

Steel surfaces are of particular interest for the department of Interface Chemistry and Surface Engineering. In close collaboration with the steel industry and in many cases funded by European funds, steel related projects cover the full range of surface treatments, which are important in modern steel surface chemistry.

In outdoor applications conversion coatings constitute a fundamental cornerstone for corrosion protection. Traditionally, phosphating is employed. Novel steel surfaces containing oxides, which cannot be attacked by pickling, are difficult to phosphate. On the other hand, passivating oxides may be relevant candidates for providing corrosion protection through grain boundaries in the phosphate coating, which would supersede the use of nickel in the baths. Using electrochemical phosphating, fully phosphate-covered surfaces on Al/Si surfaces could be obtained. Currently, their corrosion protection performance is under investigation. A new project was started on nanoceramic conversion coatings together with Henkel AG & Co. KGaA, investigating the behaviour of the future pretreatment systems under electrochemical polarisation. 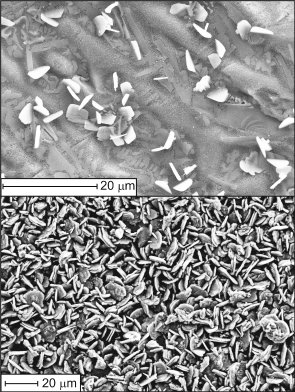 Moreover, zinc based metallic coatings are of tremendous importance for corrosion protection and are object of research since decades. Besides others, salt spray tests have been used extensively for this purpose by applied researchers, providing however only a partial picture of corrosion processes under actual environmental conditions. The novel high-throughput screening approach based on a microelectrochemical flow cell system is able to deal with the issue of the complex interrelation between many experimental parameters, in particular the variable ion composition of salts. For this purpose the setup has been extended for fully automated switching between electrolytes while still enabling a facile coupling with downstream online analytics. In a strong collaboration with Arcelor Mittal/OCAS this is utilized first of all to increase our understanding of the impact of the electrolyte components on the fundamental corrosion mechanism and kinetics, and shall finally lead to enable tailoring of corrosion protection coatings with respect to the exposure conditions.

Hot dip galvanising is another industrial production step, which is intensely investigated within the department. At the focus in the last two years were co-segregation effects of alloying elements in surface oxide formation [1-3] and effects of oxygen partial pressure not only on the wetting properties of liquid zinc but also on the subsurface structure and its mechanical properties [3-5]. Especially noteworthy is the development of a novel thermo-balance set-up that allows measurements even during fast heating and cooling steps, such as. e.g., during recrystallization annealing before hot dipping. This set-up was developed within the RFCS project “HEAT” where the aim is to grow an ultra-thin iron oxide layer during soaking that serves as diffusion barrier for alloying elements.

Fundamental problems of oxidation and hydrogen uptake during industrial production steps of high strength steel sheet are at the focus of the Christian Doppler Laboratory of Michael Rohwerder [6-10]. Significant advances on developing a novel method for hydrogen detection based on SKP were made [8]. Further, the thermodynamic simulation tool developed within the Christian Doppler lab was applied to different key issues. Hydrogen uptake during high temperature production steps, such as, e.g., recrystallization annealing was investigated in detail. Based on ex-situ [11] and in-situ (ambient ESCA performed at BESSY) analytical investigations we could show that the hydrogen uptake is correlated to the effective oxygen coverage of the surface and that some alloying elements such as Mn can decrease the water dissociation reaction, which results in lower oxygen coverage and higher hydrogen uptake.