Hubbard U corrections for Molecular Orbitals

The correlated motion of electrons may have a strong impact on the overall behavior of materials. For instance in transition metal oxides, the strong Coulomb repulsion of electrons residing in transition metal d-orbitals suppresses dynamical charge fluctuations: whenever an electron hops to a different transition metal site, some other electron at this site will leave with high probability. This phaenomenon can induce a Mott-Hubbard metal-to-insultor transition, i.e., a excitation gap forms despite the fact that the d-orbitals at each site a energetically degenerate. In standard Kohn-Sham density-functional theory, which is an effective mean-field approach, such materials can be approximated by adding a special Hubbard-U term to the Hamiltonian, that approximates the correlation energy and favors a collapse of the electronic wave function into a representative broken-symmetry state. The true correlated many-body state can then be thought of as a superposition of these broken-symmetry states. The Hubbard correlation energy vanishes for fully occupied or entirely empty orbitals, and therefore delivers an accurate estimate for the energy of the system if the broken-symmetry states are energetically degenerate. To achieve the symmetry-breaking, the mean-field energy of occupied d-orbitals is lowered, while that of unoccupied ones is raised. In an extended system, where all electronic states are typically delocalized, the occupation of a local orbital is estimated by a projection operator, which can be straightforwardly developed from a reference atomic orbital (AO).

But what if the correlated orbital is not associated with a single atom? Such a situation occurs in the superoxide ion, O2(1-). The ion consists of two oxygen atoms, while the excess electron is located in one of the two degenerate molecular π* orbitals, which are equally shared among the two atoms. Estimating the occupation for such a molecular orbital requires a new type of projection operator. We have developed a scheme to produce such molecular orbital (MO) projectors from the LCAO approach, and implemented it in the SPHInX code. For this, a reference MO is created from the linear combination of oxygen reference AOs. Similarly, a projector is created from the linear combination of truncated atomic orbitals. In both cases, the shape is uniquely defined by the orbital symmetry, but the magnitude is not. The decisive point is that the MO projector can be rescaled such that it reproduces the norm of the reference MO. This scaling factor depends on the oxygen-oxygen bonding distance, a unique aspect that is absent from atomic-orbital projectors. When used for realistic calculations, the molecular-orbital occupations for extended systems with superoxide ions (e.g. KO2) are either 0 or 1 within 1-2%, and largely independent of the O-O separation.

We have used the methodology to understand the electronic structure and energetics of potassium sesquioxide, K4O6. K4O6 decomposes into separate superoxide KO2 and peroxide K2O2 compounds below 300°C, but reforms in an endothermic reaction above that temperature. This appears experimentally as a mixed superoxide O2(1-) and peroxide O2(2-) compound, in which the electrons can dynamically jump from one O2 moiety to the next. Conventional DFT calculations predicted a smeared-out distribution of the electrons, leading to partially occupied orbitals on all O2 units and erasing the bonding difference between superoxide and peroxides. In contrast, our new approach reproduces the experimentally confirmed separation of the ions and the endothermic formation enthalpy very accurately. The hopping of electrons and the resulting bond-length relaxation can be regarded as the hopping of polarons across the system. The thermodynamic stability of the mixed compound at elevated temperatures could be explained by the configurational entropy of the electrons, which stabilizes the mixed system. 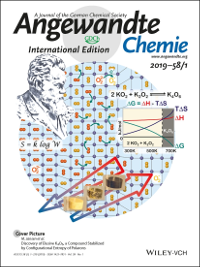 The Defect chemistry and Spectroscopy group's aim is to develop multi-scale simulation techniques for point defects and related topics, and to apply them to problems in functional materials design.
END_OF_DOCUMENT_TOKEN_TO_BE_REPLACED
[More projects from this group...]
Web-View
Print Page
Open in new window
Estimated DIN-A4 page-width
Go to Editor View